ATAI funding to test strategies to increase the adoption of Swarna-sub1 rice additionally supported PhD dissertation research of ATAI affiliate Kyle Emerick, then at the Department of Agricultural and Resource Economics at UC Berkeley. 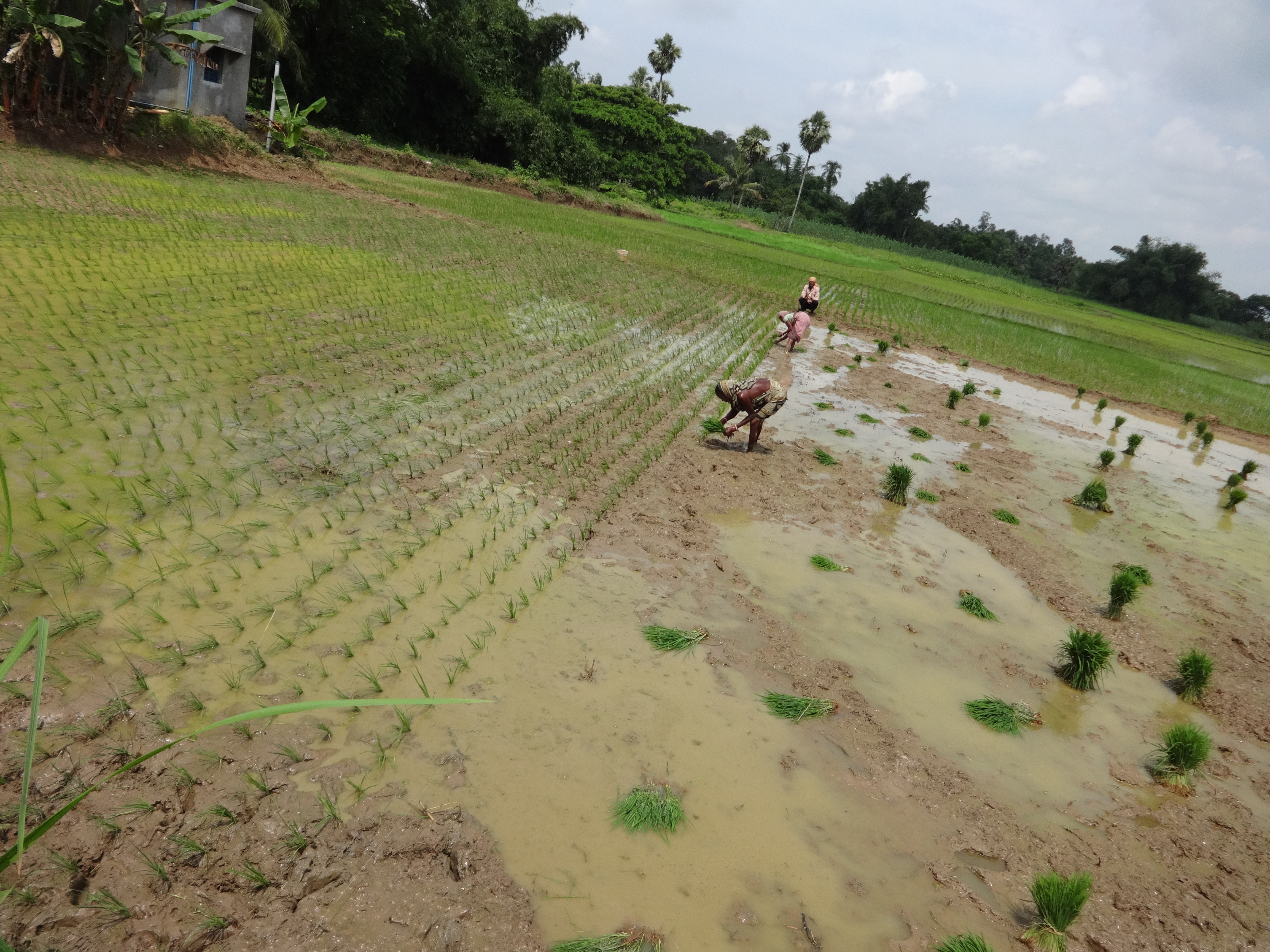 Goods and services are often traded informally in low-income countries with remote, poorly functioning markets. In contrast to the standard marketplace — where buyers and sellers are often anonymous and do not know one another— these trades often occur amongst connected villagers. Previous research has shown demand for many potentially profitable technologies is low among farmers, driven by a lack of information, high adoption costs, and concerns for risk. There have been many attempts to address the low level of technology adoption in agriculture in developing countries. In theory, diffusion via social networks could encourage adoption by spreading agricultural information among farmers with pre-existing relationships. Can network relationships be leveraged to rapidly diffuse seeds that protect farmers from weather-based risk?

The evaluation was carried out in the Bhadrak district of rural Odisha in India. This region is a coastal low-lying area where flooding is frequent. The villages selected into this evaluation flooded in either 2008 or 2011, based on satellite imagery. A majority of farmers in these villages grow a single rice crop during the Kharif (wet season) from June to December.

Swarna is a rice variety widely grown by around 70 percent of farmers. Swarna-Sub1 (a flood tolerant rice variety) is superior to Swarna. A randomized evaluation carried out from 2011 to 2012 found that Swarna-Sub1 increases yields around 50 percent during moderate to severe flash flooding of up to two weeks. In Odisha, farmers exchange seeds of one variety for output from another farmer, though farmers more commonly use their own saved seed. In the season before this evaluation, 14 percent of farmers planted at least one plot with seeds from another farmer and 66 percent saved seeds from previous harvest.

To understand whether agricultural technologies effectively diffuse among farmers, the researcher conducted a randomized evaluation to compare rates seed trading between farmers to direct door-to-door sales. Each village was visited in May 2012 and farmers were invited to a meeting to discuss Swarna-Sub1. The meeting was open to all rice cultivating farmers and was attended by 15 to 41 farmers, with average attendance being 22. The meeting provided a brief overview of Swarna-Sub1, described its similarity to Swarna, and highlighted the flood-tolerance of the crop.

At the end of the meeting, five attendees were randomly selected by public lottery to receive Swarna-Sub1 minikits. Each minikit contained 5 kg of Swarna-Sub1 seeds, which is enough to cultivate 10 to 20 percent of an average farmer’s land holdings. These minikits were given to the five farmers publicly so that all other farmers were aware of who received them, and farmers could in theory seek out recipients to acquire Swarna-Sub1 for themselves. Farmers were informed that Swarna-Sub1 would not likely be available in the market, and therefore, any farmers that wanted to cultivate Swarna-Sub1 were advised to purchase or exchange seeds with the original recipients.

In half of villages, researchers benchmarked the diffusion of Swarna-Sub1 among farmers relative to farmer demand as measured through door-to-door sales. Initially, researchers visited all minikit recipients and 15 non-recipients during the harvesting period in November 2012 to see if Swarna-Sub1 had been planted. Researchers then visited the homes of 15 non-recipient farmers who attended the information meetings but did not receive Swarna-Sub1 through the lottery to offer them minikits at varying pries. Based on the minimum support price set by the Indian government, the price for door-to-door sales varied across villages, with the price for sales in each village randomly assigned to one of three values: Rs. 10, 12, or 14 per kilogram.

Enumerators revisited all 82 villages in July 2013 to track adoption — the main outcome variable of interest. A final survey was carried out two years later to study the long-term effects from the seasons of 2014 and 2015.

Overall, diffusion of Swarna-Sub led to much lower rates of adoption than direct sales, suggesting that trading frictions exist within village economies. Demand for Swarna-Sub1 when sold door-to-door was five times higher than the adoption rates achieved when seeds are organically diffused among farmers through recipients of minikits. Across all three price levels, 41 percent of farmers purchased Swarna-Sub1 seeds in villages were Swarna-Sub1 was sold door-to-door, compared to 7 percent of farmers who obtained Swarna-Sub1 seeds from other farmers. This gap closes over time, but remains significant after two additional seasons.

Social connections, as measured by shared caste or surname, do influence diffusion but only partially explain the low levels of adoption. Sharing a surname with a recipient increases the likelihood of adoption by 3.5 percentage points (50 percent) in villages that were not provided with door-to-door sales. Similarly, being part of the same sub-caste as an additional recipient leads to an approximate 4 percentage points (53 percent) increase in adoption. These caste effects on adoption are significantly smaller in door-to-door sales villages. However, adoption gaps exist for even the most well-connected farmers. The concentration of trading within social networks does not by itself explain the trading frictions

The researcher also eliminates two alternative explanations for possible adoption gaps between door to door sales and diffusion through social networks. Researchers found
no evidence that it was more profitable for farmers to sell the output as rice (instead of as seeds) for others’ consumption now were farmers made being better off by consuming their own rice rather than transferring it.

Using social networks to diffuse seeds got seeds in in the hands of farmers who were more likely to benefit from adoption. Researchers found some evidence that predicted returns from Swarna-Sub1 were higher on average among adopters in villages that had to obtain seeds through their social networks than farmers who were offered seeds through from door-to-door sales. Farmers that adopted seeds in villages with door-to-door sales were also less likely to experience flooding.

Even though social networks reach farmers who are more likely to benefit, trading frictions in farmer-to-farmer exchange are severe enough to make door-to-door sales cost effective. These frictions cause the average farmer to lose US$51, an amount equivalent to about 20 days of casual work or about 8 percent of the annual rice harvest. In contrast, the cost of the visits amounted to US$9 per farmer.

Use of results: As a result of the research, the International Rice Research Institute (IRRI) rethought their strategy on promoting their new varieties as a result of the evaluation. Previously, IRRI worked with the government and a network of partners to disseminate seed minikits to lead farmers. This approach relies on those lead farmers cultivating the variety and effectively starting the process of natural diffusion through social networks.  Based on these results,IRRI has started to work more with the Odisha State Seed Corporation to increase the local availability of Swarna-Sub1 for farmers.