Inducing Demand for Information in Social Networks to Promote Technology Adoption: An Alternative Approach to Extension

This blog post was originally published on Vox EU’s platform at: https://voxeu.org/article/side-side-demonstrations-persuade-farmers-adopt-new-technologies

The research discussed here from Bangladesh built upon research funded by ATAI in India, and was conducted by Manzoor Dar, Alain de Janvry, Kyle Emerick, Erin Kelley, and Elisabeth Sadoulet.

Networks are important for transmitting knowledge among farmers, but it is not always easy or appropriate to identify the best farmers which whom to seed a new technology. The column shows that side-by-side demonstration plots for a new variety of rice are successful at inducing learning. This method makes it less important to identify the farmers best positioned to spread information and has the potential to target individuals who are not connected to influential farmers.

Agriculture remains key for growth and poverty reduction in sub-Saharan Africa and South Asia (Goyal and Nash 2016). But land is scarce and the rural population is growing, and so this requires new technologies that can boost land and labour productivity. Unfortunately, adoption rates for this technology are low – often because farmers do not know these innovations exist (Bridle et al. 2018). Attempts to overcome this have typically used farmers’ social networks. They have provided new technologies to the most influential farmers in the network to maximise information diffusion (BenYishay and Mobarak 2018, Beaman et al. 2019).

Recently we conducted an experiment on a new method to encourage learning in rural environments (Dar et al. 2019). We investigated the impact of side-by-side demonstration plots – the first users of a new crop variety cultivate it side-by-side with a commonly used variety. This may motivate others in the community to seek information from the demonstrating farmers, even if they are outside their peer groups.

This is appealing for two reasons. First, it is no longer necessary to identify and work with the farmers who are theoretically best positioned to spread information, which may not always be feasible. Second, it has the potential to target individuals who are not connected to the most influential farmers in the network.

We explore these concepts using a field experiment on the diffusion of a new short duration rice variety (BD56) in Bangladesh, in collaboration with the International Rice Research Institute. Short duration varieties frees the land for a third crop between the two rice seasons. This is at the cost of a lower rice yield but planting three crops a year can be more profitable than the traditional two crops. There is only a benefit from adopting BD56, however, if farmers grow the third, typically high-value, crop.

The main experiment (‘diffusion experiment’) contrasts demonstrating farmers with demonstration methods. We introduced the new rice variety to five farmers (referred to as ‘entry’ points) in 192 randomly selected villages, selected from those deemed suitable for the introduction of the new variety. We cross-randomised these villages across two treatments: the selection criteria for entry point farmers, and the demonstration method. Table 1 depicts the experimental set-up.

The entry point farmers (rows) include random farmers, the largest farmers in the village, and the farmers identified by agricultural extension officers (SAO) as being the most effective farmers in the village to showcase the features of a new variety. The demonstration treatment (columns) contrasts side-by-side demonstration, where entry points were asked to set up a demonstration plot with BD56 grown side-by-side with the next-best variety selected by the farmer (indicated by two posts, each with the name of the variety on each post), to the standard demonstration with BD56 (and one post).

This experiment allows us to say something about the overall impact of our new learning method, as well as understand the way it spurs diffusion among farmers. An impact evaluation experiment allows to further explore which types of farmers these different diffusion methods target. Here, we randomly selected an additional 64 control villages in which we provided new seeds of the most popular long duration variety (BD51) to 15 farmers. These farmers were identified using the same criteria as in the 192 BD56 villages (5 random, 5 largest, and 5 SAO-selected).

We use this control group to identify the benefits of the short duration rice variety, and use machine learning tools developed by Chernozhukov et al. (2018) to identify a set of farmer baseline characteristics that correlate with the propensity of reaping these benefits, which we refer to as a ‘heterogeneity index’. As the main benefit of BD56 comes from planting a third crop, our heterogeneity index is measuring how likely a farmer is to plant a third crop as a result of adopting BD56 relative to BD51. Bringing this index into the diffusion analysis, we estimate whether the treatment effects on information diffusion vary with the predicted probability that the farmer would actually plant this third crop.

Result 1: ‘Seeding’ technologies with largest or SAO-selected farmers expand diffusion, but so do side-by-side demonstration plots.

We also establish that large and SAO selected farmers are central in the network and are therefore best positioned to spread information to a large number of farmers. We confirm that the extent of diffusion by large and SAO farmers is largely explained by their centrality in the network.

Importantly, side-by-side demonstration plots also increase knowledge when cultivated by randomly selected farmers. Specifically, the rate of awareness increases by 7.2 percentage points when random farmers grow BD56 side-by-side with a chosen comparison variety, relative to a control where the new variety is demonstrated on its own.

Our second result clarifies how these diffusion methods operate. We find that demonstration plots increase the number of conversations about BD56 by 12%, mostly with the demonstrating farmers.

The data on conversations help rule out an alternative explanation: that the side-by-side demonstrations are more effective at simply broadcasting information on the existence of BD56. Instead, our results suggest that these demonstration plots caused farmers to engage in learning from others, rather than just learning about the new technology because there is an additional post in the field.

Large farmers also diffuse information beyond their direct networks. They have more extensive networks than randomly selected farmers, but they also reach farmers outside these networks. In villages where large farmers were entry points, the probability that farmers became aware of BD56 and engaged in conversations is the same regardless of whether they were connected or not. This is less the case for SAO-selected entry points.

Our findings using the machine learning technique detailed above indicate that the gains in diffusion of knowledge – by either selecting entry points or using side-by-side demonstration plots – were concentrated amongst farmers that would be less likely to capitalise on the main benefit of BD56 if adopting.

For example, demonstration plots increased the probability of hearing about BD56 for farmers with below-median predicted effects on cropping intensity by 12 percentage points (left-hand panel of Figure 2), and the probability of conversations about BD56 by 0.29. But they had no effects for farmers who appeared more likely to increase cropping intensity if adopting BD56 (above-median predicted effects in the right-hand panel).

Similarly, seeding with the largest farmers increases the probability of hearing and having conversations about BD56 for farmers with below-median values of the heterogeneity index, but had no effect for farmers that are above the median. 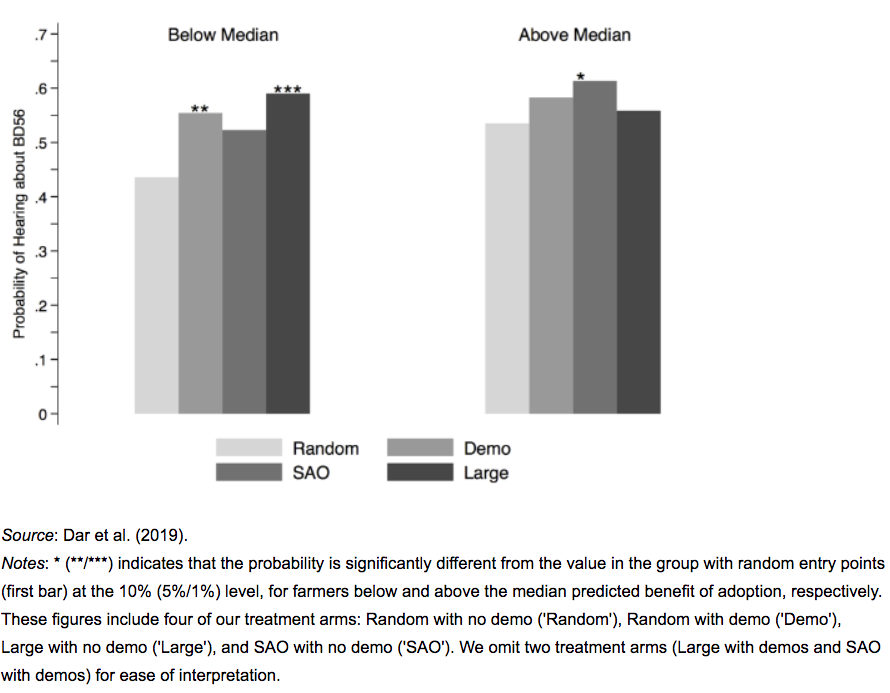 There is a lot of evidence that networks are important for knowledge transmission, but there have been fewer studies that compare information cascades initiated by selecting entry points with alternative methods of spreading knowledge. Our study shows that inducing conversations – by randomly signalling through the placement of side-by-side demonstration plots that there is something to be learned from demonstrating farmers – can be just as effective as the method of seeding central farmers.

This is important because there may be contexts in which identifying entry points that are best positioned to spread information would be too costly or socially undesirable.

Future research on this approach to social learning could explore alternative ways of signalling to community members that there is something to be learned from demonstrating farmers, whether or not they are inside their social network.

Also, combining diffusion experiments with standard impact evaluations allows the researcher to estimate treatment effect heterogeneity, and use that to discover the diffusion strategies to reach the people most likely to benefit from an innovation, even without a strong prior on which observables drive the heterogeneity. 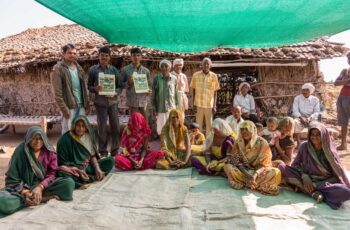 The Review of Economics and Statistics